Kuzzle is just a Node.js application that also needs Elasticsearch and Redis to run.

The only specifity is that Kuzzle needs to compile C and C++ dependencies so a successful npm install execution needs the python and make packages, as well as C and C++ compilers (in the following examples we'll use g++).

At Kuzzle we like to use Docker and Docker Compose to quickly deploy applications.
In this guide we will see how to deploy a Kuzzle application on a remote server.

In this guide we will perform a basic deployment of a Kuzzle application.
For production deployments, we strongly recommend to deploy your application in cluster mode to take advantage of high availability and scalability.
Our team can bring its expertise and support for such deployments: get a quote

We will deploy the following services in Docker containers:

We will use Docker Compose as a basic container orchestrator.

Only Kuzzle will be exposed to the internet on the port 7512. 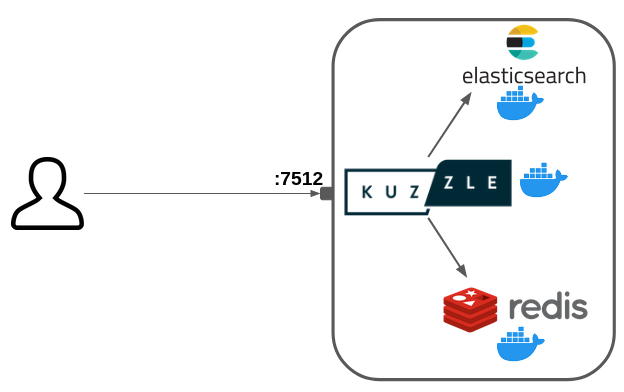 This deployment does not use any SSL encryption (HTTPS).
A production deployment must include a reverse proxy to securize the connection with SSL.

We are going to write a docker-compose.yml file that describes our services.

Then create the deployment/docker-compose.yml file and paste the following content:

This configuration allows to run a Kuzzle application with Node.js alongside Elasticsearch and Redis.

Kuzzle needs compiled dependencies for the cluster and the realtime engine.

We are going to use a multi-stage Dockerfile to build the dependencies and then use the node:12-stretch-slim image to run the application.

Deploy on your remote server #

Now we are going to use scp (SSH copy) to copy our application on the remote server.

Then simply connect to your server and run your application with Docker Compose:

Your Kuzzle application is now up and running on port 7512!